May Bank Holiday weekend and a plan that had been several months in the making... Fliss, Viv and Rob had booked on a Scotland360° "High Mountain" photography weekend, with the aspiration to see and to photograph the sunset and the sunrise from a mountain top in North West Scotland.

Scottish weather is notorious for its inconsistencies although, traditionally, May is perhaps a month to rely on more than others! With that in mind, we had settled for the last weekend in May and with options in place for the night out on the hill, I felt that we were covering as many bases as we could.

Watching the forecast intently in the run up to the weekend, it seemed that Friday night might just give us what we were looking for. The plan was confirmed, the travel arranged and we agreed to meet up in Ullapool on the Friday morning armed with cameras and wild camping kit for a night out on Cul Mor. At 849m high, Cul Mor is a Corbett, situated in Coigach which arguably has some of the most stunning mountain scenery in Scotland. A shapely, twin summited mountain, Cul Mor rises out of the Assynt landscape of peatbogs and lochs to provide a spectacular viewpoint to the Assynt hills, the north west coast of Scotland and beyond to The Minch and to the Isle of Lewis.

The classroom for the day - with views to Ben More Coigach to the left, Cul Mor in the centre, Suilven, Canisp and Ben More Assynt.

Driving over from the Black Isle that morning, the temperature started climbing, the sky became clearer and the sun became brighter. This was looking promising and the plan seemed to be coming together. Introductions over coffee at the Ceilidh Place in Ullapool and an opportunity to get to know one another and to start some great banter!

The plan was to start up the hill just after lunch, following the track up from Knockan Crag to around 600m which gave us not only a great campsite, but also a short ascent up to the summit. As we left Ullapool, Radio Scotland announced that this was going to be one of the hottest days of the year - up to 30°C!! It certainly felt like it and, setting out after lunch, it was certainly a day not to rush, such was the heat.

Arriving at the campsite late afternoon, we pitched camp, had a bite to eat and made our plans for the evening. Aiming to be on the summit for 21:00hrs, that provided the best part of two hours before sunset at 22:30 and some time to savour the sunset before heading back to the camspite

With several hours sleep, the plan was to be back up at 04:00 the following morning to experience the sunrise over the surrounding mountains.

Our luck was definitely in!. With sunset views and pastel colours over the Assynt hills and across the Minch; some six hours later the sun rose as a vivid ball of fire over Ben More Assynt. The photographs below tell the story...

The start of the evening light as Rob approaches the summit of Cul Mor, with Suilven in the background.

Suilven in the background, with pastel shades starting to form in the sky. 21:15 and the start of dusk.

Evening light over The Minch - mirror calm lochs and a tranquil sea with low lying Lewis in the far distance.

Framing and composing with great light in a superb location. Using the location to its best and exploring the possibilities.

The Assynt hills as seen from the approach to the summit of Cul Mor - Suilven and Quinag to the north, with northerly Ben Stack in the far distance.

Loch Sionascaig and the view to the Minch and beyond.

Sunset golds and blues over Assynt and the Minch

A sunset panorama from the summit of Cul Mor, looking to the west and over The Minch to the Outer Hebrides.

The Assynt hills silhouetted against the pastel shades of red and orange to the west as the sun slowly sets. Suilvan, Canisp, Quinag with Foinaven and Arkle in the far distance.

Rob on location at the summit of Cul Mor, admiring the view and capturing the spectacular sunset to the west.

Descending from the summit after sunset and using the last of the evening light to retrace our way back to the tents, it was time to turn in for a few hours before a 4:00am rise to capture the sunrise over Ben More Assynt.

04:23 and the orange glow and the pastel colours of the morning sunrise appear behind Ben More Assynt.

A sunrise panorama from the campsite, with Suilven and Quinag to the left, looking across Ben More Assynt to the rising sun, and right towards the Fannaichs. High clouds, streaked with the morning light and the promise of a great lightshow.

The lightshow continues and the sky becomes more vibrant with the continuation of the morning lightshow.

Golden skies and the best of the morning light - sunlight reflected in Loch Veyatie, from our viewpoint high up on Cul Mor.

As the sun prepares to rise over the eastern hills, Viv and Rob prepare to capture the moment of the sunrise.

Studies in composition.... Foregrounds, subjects and backgrounds. The topic of the morning and early in the morning!

The sun rising over Ben More Assynt, with the silhouettes of Suilven and Quinag and the backdrop of Cul Mor.

Our classroom for the day - with views to Ben More Coigach to the left, Cul Mor in the centre, Suilven, Canisp and Ben More Assynt to the right of shot.

Rob and Viv, with Cul Mor in the background, the sunrise in full splendour and Viv admiring the vista as daylight breaks through once more.

A distant figure in a big landscape

The end of the lightshow

I’m Angus Mackie, a professional forester and photographer, based just north of Inverness on the beautiful Black Isle.  I'm on the North Coast 500 and am well placed to discover most of the Highlands.  The iconic scenery of Glen Affric and the Cairngorms are close by whilst many of the wild and dramatic locations on the west coast are within easy reach.

Mountains, landscapes, coastlines....  As a landscape and panoramic photographer, I enjoy exploring Scotland and its wild and remote places and have discovered some of the best photography locations in the Highlands over the last 35 years of living up here.  With a broad and wide ranging knowledge of the Highlands, I still enjoy finding new locations and fresh perspectives for my photography.  The use of natural light to capture stunning scenery at spectacular locations is very much a key factor for my photography.

I’m a qualified Summer Mountain Leader, a Sea Kayak Leader and a UKCC Level 2 Sea Kayaking coach, with many years experience of leading and guiding.  I am also a longstanding member of Dundonnell Mountain Rescue Team. 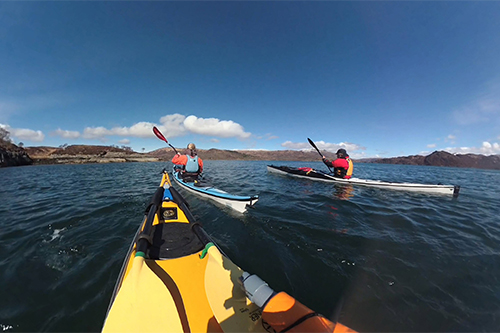 May Bank Holiday weekend and a plan that had been several months in the making...

There always seems to be one perfect January weekend each year...

A superb viewpoint from Beinn Enaiglair

A day out on the hills, just after New Year...

Dundonnell Mountain Rescue Team has a training exercise every month...