Lying some 150km west of the Scottish mainland, the remote archipelago of St Kilda is a place of superlatives.

A World Heritage Site and a National Nature Reserve, St Kilda holds Europe's most important seabird colony, with one of the world's largest colonies of gannets and fulmars.

Having been lucky to visit this spectacular setting several times since my first visit in 1981, the images in this gallery attempt to represent some of this splendour.

If you'd like to search for particular images, either on this page or throughout my website, please use the search facility below...

And if you are interested in some of my images of St Kilda for sale, please follow the link below to my Online Sales Page...


My next visit to St Kilda was an overnight trip to the archipelago and back again...

I'm slightly hazy on the exact details but I was working in Lochaline at the time and sailed fairly regularly. There was a phone call from a sailing pal who asked if I wanted to crew on one of the charter boats which regularly ran out to St Kilda. The deal went something like this, "Be on the pier at Lochaline for 23:00 and look out for the charter boat coming in from Oban and heading for St Kilda. Take the ropes and climb aboard and make yourself useful on the voyage. It's an out and back run".

One day's leave from the day job and an amazing overnight trip up the Sound of Mull, across the Minch, through the Sound of Barra and then north westwards out to St Kilda. I seem to remember we arrived about late morning / early afternoon the following day and dropped off the party of conservation workers. There was a quick turnaround and back to Oban via Lochaline where I jumped ship the next morning, just in time to go to work!

It could only happen on the west coast in the 80's - crewing on a boat with a crew I didn't know on an overnight passage out to a remote destination. But those days were lots of fun....!

The distinctive shapes of Stac Lee and Stac an Armin define St Kilda. Stac an Armin is the higher of the two at 196m tall whilst Stac Lee measures 172m. The highest sea stacs in the Bristish Isles, they are also home to the St Kildan gannet population. Just about every voyage to St Kilda takes in the magnificent sea stacs and the neighbouring island of Boreray. Separated by a narrow channel, the two stacs make for amazing views.

Rising vertically out if the sea, Boreray is another iconic island in the St Kilda archipelago. Reaching 384m high, Boreray was previously occupied and there is evidence of a farming community living on Boreray in the prehistoric period. Three small cleit bothies were used by the St Kildans for shelter and accommodation for fowling expeditions.

Since my first visit to St Kilda in 1980, the Feather Store had been renovated back to its original condition with a new roof, doors and shuttering over the windows, saving the building from further deterioration from winter storms.

Leaving St Kilda in the late afternoon for the run overnight back to Lochaline and on to Oban, the islands of Hirta and Dun were enveloped in a sea mist, slowly disappearing as we headed out to sea.


My first visit to St Kilda in 1980 and a series of images some of which are now historic.

Abandoned in 1930, the remote island history of St Kilda has a remarkable history spanning two millenia.

The ruined Feather Store, now renovated and re-roofed and a panoramic image across Village Bay from the island of Dun. Back in 1980, it was possible to access Dun, courtesy of the miltary personnel and Zodiac ribs. With a reduced miltary presence and the fragile ecosytems of the island, along with the precarious nature of the topography, this opportunity is seldom possible for visitors to St Kilda. The church on St Kilda, a focal point for the community.

"The Sabbath was a day of intolerable gloom. At the clink of the bell the whole flock hurry to Church with sorrowful looks and eyes bent upon the ground. It is considered sinful to look to the right or to the left". 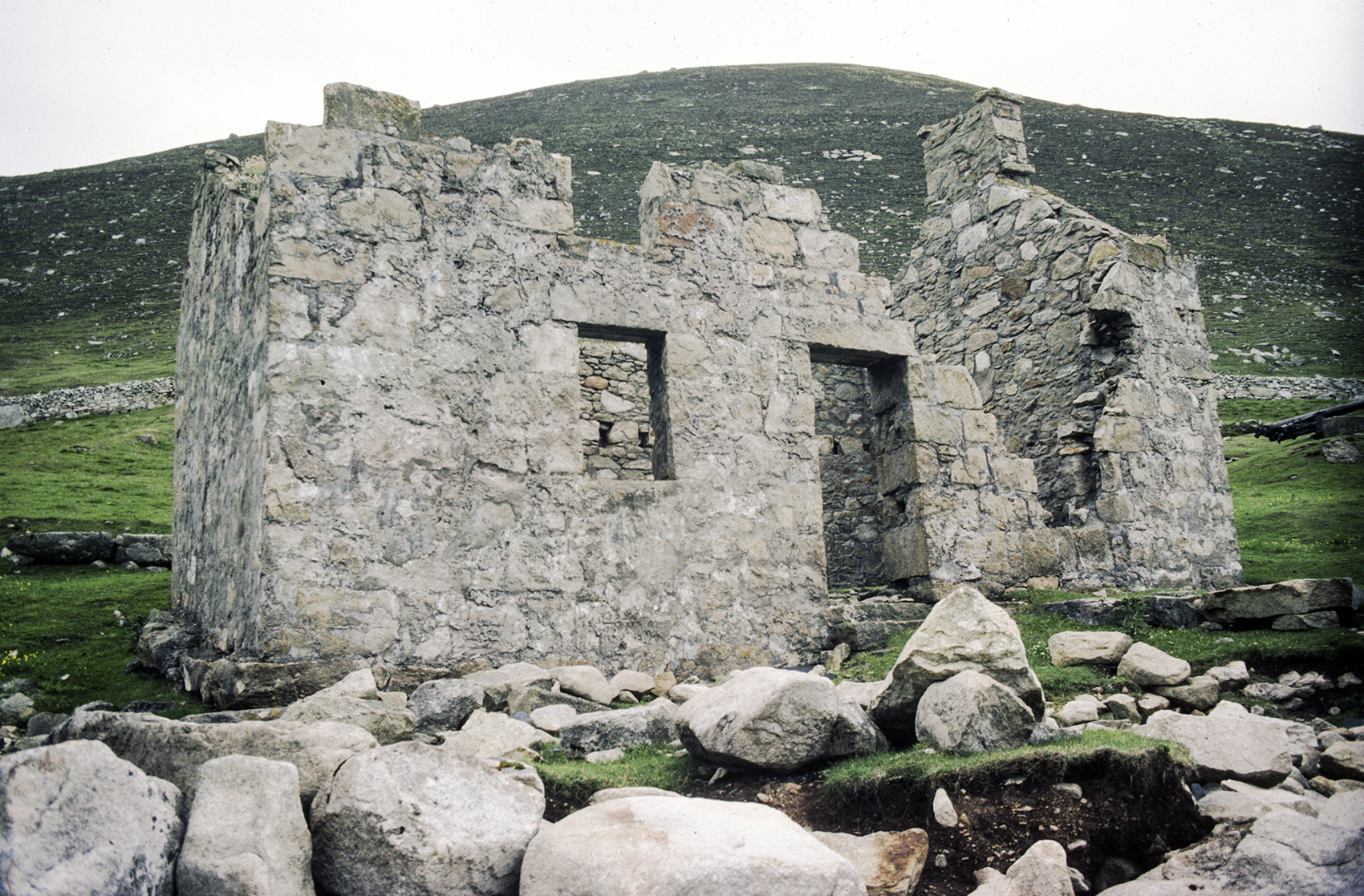 Back in 1980, the Feather Store was a ruined shell. The islanders paid the Laird, who owned the island, rent in the form of Fulmar and Gannet feathers which were stored here and collected annually. The Mark II QF gun was installed by the Navy in WW1 after the island was shelled by a German U-Boat and there is a poignancy to the Village Cemetery for a population whose life expectancy of some 40 years...

"It wasn't what you would call a bad submarine because it could have blowed every house down because they were all in a row there. He only wanted Admiralty property. One lamb was killed… all the cattle ran from one side of the island to the other when they heard the shots."

The Zodiac trip to Dun

A historic photograph of the landing on the island of Dun. Rare too in that there is a photograph of me as a fresh faced student...

The panoramic view across Village Bay

Looking from Dun across Village Bay to the main island of Hirta, with Boreray and the stacs sitting out to sea, some 8km away.